Documentation: The Cornerstone of Patient Safety

From a professional liability standpoint, the medical record is a legal document that serves as evidence that the standard of care was upheld. Regulatory agencies use the medical record to determine compliance with quality of care standards. Finally, correct documentation is necessary for accurate and timely payment for furnished services.

A  2015 report by CRICO, a division of The Risk Management Foundation of the Harvard Medical Institutions, Inc., found that “…communication failures were linked to 1,744 deaths in five years and communication was a factor in 30% of 23,658 cases ﬁled from 2009-2013.” Documentation is directly linked to communication. The healthcare system is complex and patients often transition through many care settings.

Although verbal communication is the richest form of communication, we simply cannot rely on the ability to speak to every healthcare provider involved in the care of the patients. The documentation in the medical record is the central “storehouse” for information. When we consider that the written word may be our only communication with other members of the healthcare team, its importance takes on new meaning. This perspective helps us regard documentation as an integral part of patient care rather than an “extra step.” Consider how documentation played a role in a medical error in involving a college student in New York, NY named Libby Zion.

Zion was admitted to a Manhattan emergency room (ER) with a high fever and agitation. After consulting with her family physician, the residents who evaluated Zion in the ER administered a sedative and painkiller. What none of the caregivers knew was that she was taking an antidepressant that was dangerously contraindicated with the drugs the physicians gave her in the ER. The drug combination ultimately proved fatal and Zion died from cardiac arrest.

Some common errors that can result in medical errors include:

Medical Liability – Your Best Defense or Your Worst Enemy

Some of the common documentation vulnerabilities include:

Failure to communicate promptly and appropriately for the situation and failure to document medical care continue to be the two factors most commonly associated with defensibility of all medical profession liability claims. The documentation will be examined for completeness, accuracy, omissions, alterations, and specifics related to the treatment.

In a negligence lawsuit the plaintiff must prove, by a preponderance of evidence, that the healthcare professional was negligent in rendering care, and that the negligence was the proximate cause of the injury. Negligence is defined as “the omission to do something which a reasonable man, guided by those considerations which ordinarily regulate the conduct of human affairs, would do or doing something which a prudent and reasonable man would not do.” Either way, the medical record is a significant part of evidence.

Litigation of medical liability cases often occurs years after the care was provided. Although your memory of the pertinent events may fade, the events documented in the medical record are heavily relied upon as the true facts – thus the adage “the medical record – the witness that never dies and never lies.”

Falsification of a medical record is a serious mistake that can carry civil and criminal penalties.  When an alteration of a medical record is discovered, a plaintiff’s attorney will almost certainly attempt to show that the alteration was intended to falsify the record in an effort to defend substandard care. As a result, the healthcare professional’s credibility will be seriously compromised. Many jurors heavily rely on the credibility of the healthcare professional in malpractice cases.

Unfortunately, some people do choose to falsify information. Fraud is “the intentional deception or misrepresentation made by a person with the knowledge that the deception could result in some unauthorized benefit to himself or some other person.” Misstatements or omissions are not necessarily fraud. In fact, they’re usually errors. Errors aren’t deliberate; fraud is. Fraud requires the intent to mislead.

A former nurse with the Department of Veterans Affairs pleaded guilty in 2015 to altering, falsifying and destroying records, and committing computer fraud. The nurse falsified electronic medical records of a 76-year-old veteran who was under the care of Enrique Martinez while working for the VA in Florida. Martinez allegedly provided poor care to the veteran so he falsified records and destroyed the computer system to cover his tracks.

Intentionally falsifying medical records also constitutes spoliation of evidence. Spoliation is the destruction or significant alteration of evidence with a failure to preserve property for another’s use as evidence and pending or reasonably foreseeable litigation. As demonstrated in this case, falsification of a medical record can lead to criminal penalties.

Regulatory Compliance: Not Documented – Not Done

In recent years, the U.S. Department of Health and Human Services Offices of the Inspector General (OIG) has stepped up enforcement activities surrounding clinical documentation and fraud. Some of the most commonly perpetrated examples of healthcare documentation fraud include:

The American Occupational Therapy Association’s (AOTA) Code of Ethics (2015) reinforces in Principles 4 and 5 that occupational therapy practitioners have an ethical and legal duty to be vigilant in knowing and following the standards and regulations related to clinical documentation to accurately report “treatment time” and bill for their services. The AOTA offers online resources to assist providers with documentation and billing issues.

View all InSights
Blog
A Discussion on the Risks and Best Practices in Mental Health and Substance Use Disorders Care
The current environment has highlighted the increased demand for both mental health and substance use disorder care needs. Recently, Michelle…
Blog
The Dawn of Digital Healthcare: Risks and Strategies for Liability and Coverage PLUS Webinar
The intersection of cybersecurity and healthcare industries continues to rapidly accelerate as we move into a more digitized future each…
Blog 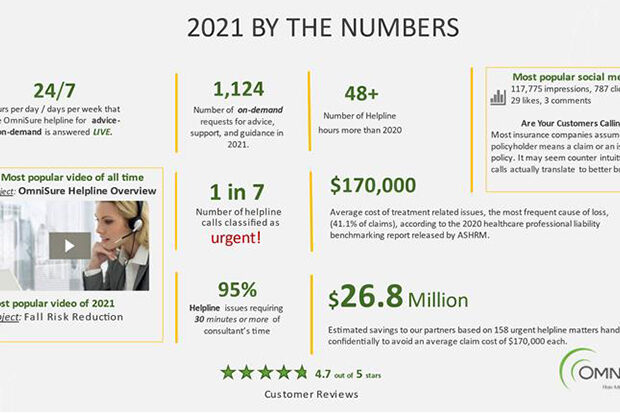 OmniSure Looks Back on the Highlights of 2021
2021 brought an immense amount of disruption on a global scale. Not surprisingly, the healthcare industry was in a constant…

Learn more about how our network of health and human service
specialists can help protect your assets and your reputation.